Fast food has been a controversial topic for many, many years. There are a lot of restaurants all over the globe that always seem to be bustling with customers. Some people love it and see no problem in eating it every day, while some absolutely hate it and say it’s one of the most unhealthy things you can put in your body. However, we can all probably agree that the convenience of fast food can’t be denied. You come in and get warm and tasty food just like that. To delve deeper into this topic, Redditor user c0rdl asked: “What fast food place is grossly overrated?” and people shared their opinions.

It seems that lots of popular fast food places are overrated and are just not good at all, based on the responses of these internet users. What do you think is the most overrated one? Share in the comments down below! 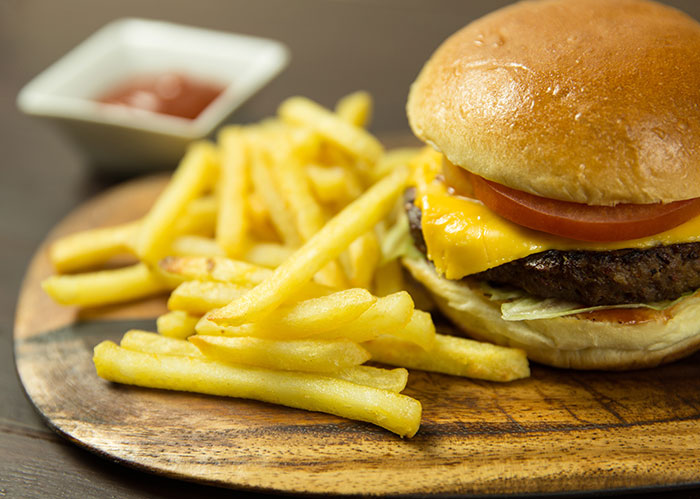 Correct answer is….all of them. The prices have gone up so much its not worth it. The fast food empire is built upon being cheap and fast. They really are not either these days.

We talked to clinical dietitian Edvardas Grišin and he gave us some amazing insights on this topic. First, we asked him what is his least favorite fast food chain: “There couldn’t be one answer to this question. There are too many of us in the world to be objective at this point. From a nutrition perspective, European-Asian food is the most questionable fast-food chain in Lithuania’s market.

It doesn’t mean that Asian food is somehow unhealthy and bad for people’s health, but in our country, most Asian food lacks authenticity. People associate it only with deep-fried, fructose corn syrup-glazed vegetables, and meat of unknown origin, which is far from reality.” 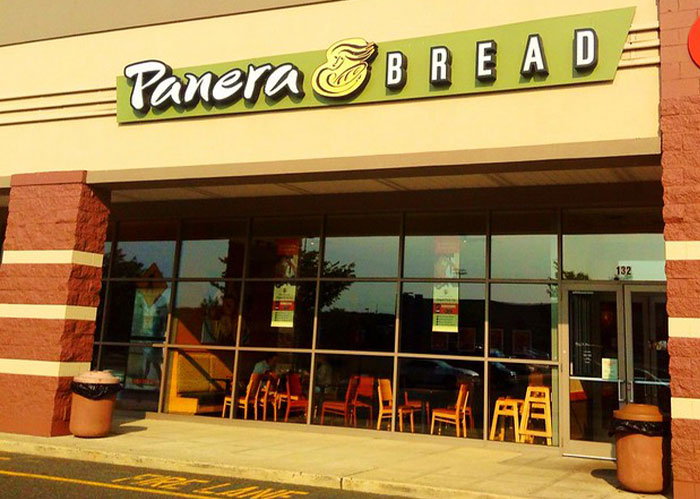 They charge *ten dollars and nineteen cents* plus tax for a mac and cheese. It’s good but I know how to make my own

Food tastes like literally nothing. Like there is a department dedicated to removing flavor. It’s the food equivalent of Hint water.

Edvardas Grišin shares if fast food is good or bad: “More than half (or even more) of fast foods served for people are generally nutrient-poor and high in harmful substances for the human body. It is usually calorie-dense, and high in saturated or unsaturated oxidized vegetable fat. The bigger part of its carbohydrate content comes from simple sugars lacking fiber and minerals.

Apart from its nutrient content and quite simple accessibility in whatever part of the world a person is in, fast food drives people to eat this type of food (as the first word of our topic says) very quickly. It is called unconscious eating, when our brain barely realizes the eating process during those 2-3 minutes of hedonic pleasure, which is more or less the time needed to demolish a double patty burger.

All the above-mentioned reasons (nutrient composition and people’s behavior) should at least put a red flag of warning on this type of gastronomic cuisine – high consumption of fast food can have a detrimental negative impact on people’s cardiovascular and metabolic health. Obesity has become the leading chronic disease in the world, which, as we see, is spreading further despite all the government health-promoting policies.

Another question is: Should fast food options always be considered a bad choice? It depends. Nowadays we can find many different new fast-food options around the country. We are delighted to see that they offer more unprocessed, fresh produce for customers. Fast food shouldn’t be always unhealthy. Let’s trade deep-fried vegetables for fresh or lightly pickled ones, mayo for avocado guacamole and we will have a healthy option for ourselves!” 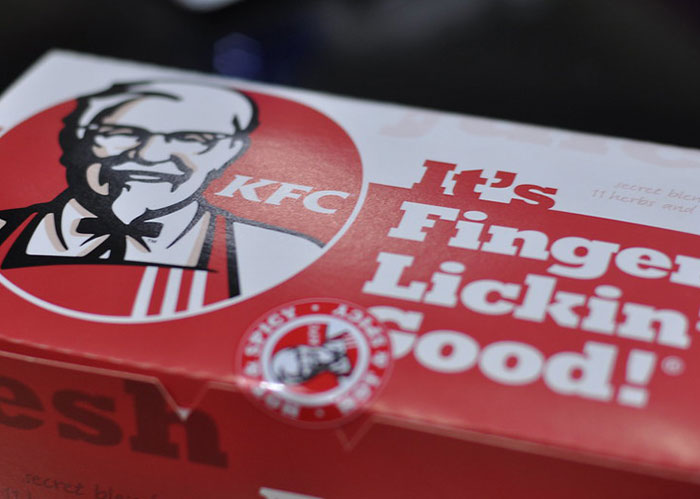 You order it, it takes an age to make, and you eat it. The feeling afterwards of self loathing and disgust is the reason you haven’t had KFC in ages.

The professional also shares why he thinks fast food is so loved: “The answer is both very simple and complicated. We can say: ‘It’s easily accessible and… why not? Because it’s tasty!’ On the other hand, what we don’t see is the effects of fast food on our gut and hormone profile.

The newest scientific data shows that poor nutrient-dense food consumption (as fast foods generally are) has a negative impact on gut microflora composition and neurohumoral brain circuits, which are responsible for people’s eating behavior. Our brain becomes resistant to stimuli coming from the gastrointestinal tract after nutrients from food get there and, with time, needs even bigger doses of those substances.

In society it’s popular to say ‘sugar addiction,’ but it’s way more than that. Let’s face it – tasty food is a combination of sugars and fats. Pasta isn’t tasty without its sauce, pizza dough is just dough without toppings on it. There will not be one substance to blame, that’s why avoiding sugar and replacing it with sugar substitutes (even calorie-free) won’t give long-term beneficial results.

People have to realize that the food market is growing and sooner or later we will hardly be able to distinguish what is healthy and what is not. That’s why we shout out for people’s education in order to prevent the metabolic disease burden in the world.” 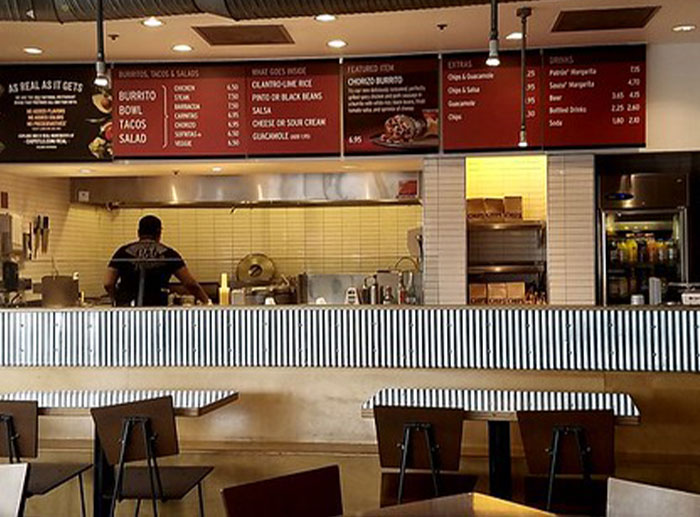 Honestly, I find Chipotle’s food bland and boring, definitely not worth what you pay for it. Now, take me to Salsarita’s and you’ll be my best friend.

Edvardas Grišin also gives some great food and nutrition recommendations for people: “Eat fast food only in critical situations – there are always better food possibilities around us. Even petrol stations nowadays have a wide variety of healthy fast-food ideas, from salads with grilled meat to protein bars or even jerky strips – it will always be a better choice than a hot dog.

Fast food shouldn’t always be bad. Always read the ingredient list of the food that you are heading to buy.If the piece of food that is smaller than your palm has a 20-ingredient list with half of it starting with ‘e’ – think again whether it is the best option to choose.

Go for quality – not quantity. A family-size pizza with salami and cheese made of vegetable fats won’t be necessarily a better option than a medium one, but with better-quality toppings on it.” 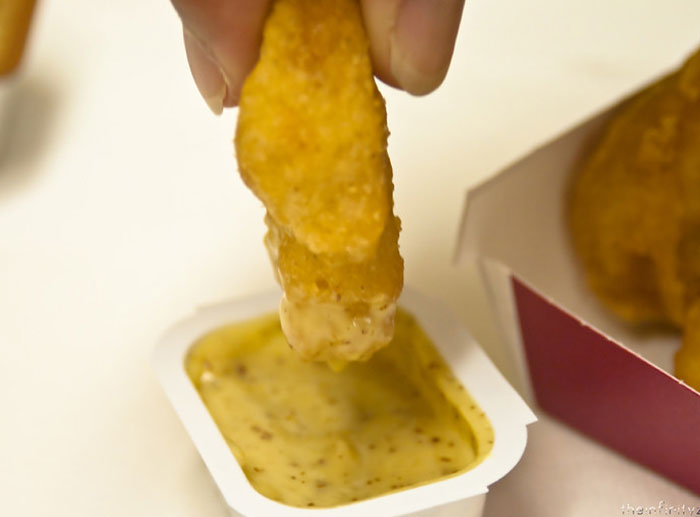 Everyone is going to have different answers and they’re all going to come down to the fact that the quality of fast food is extremely dependent on the state of the particular restaurant you go to.

I have a McDonald’s by me where the McNuggets are always inedible, but another where they’re pretty good.

The Popeyes near me is always terrible, but anywhere else I’ve been, it’s amazing (but still overpriced). 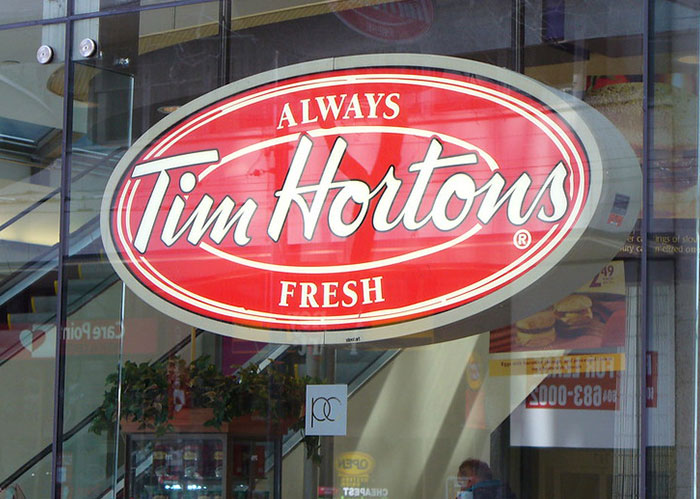 It’s an absolute travesty that they’ve literally advertised their way into Canadian identity while cutting costs in every way possible.

Their coffee is at the absolute bottom of the barrel, and I genuinely can’t think of a major chain that serves worse food. It’s *awful*.

Nothing is made in house, and simple basics, like toasting bagels – something that’s been an issue for *fifteen years* – remains unaddressed. They’re still somehow always cold AND burnt.

Not to even touch on their abuse of temporary foreign workers, abysmal pay, and awful work culture.

[edit – I cannot believe I forgot to add this, but after only a few weeks of working at Tims, a girl ate something she was allergic to and nearly died. The management tried to get staff to sign a waiver *taking personal responsibility for any fallout*. Absolute f****d.]

“Get your water and fiber in! Even though we eat fast foods, our primary healthy eating habits can’t be forgotten.

Before going to get a fast-food meal, eat a bowl of berries and drink at least 300-400ml of water. Hydration will reduce the sense of hunger and fiber will at least partially prevent digestive disorder risks like bloating which is often a post-meal ‘souvenir’ in fast food joints.

Don’t forget that more physical activity is the strongest gun we can use to decrease the negative impact of fast food on our well-being. From jogging to weightlifting, skiing or swimming – choose whatever you like and make it happen!” 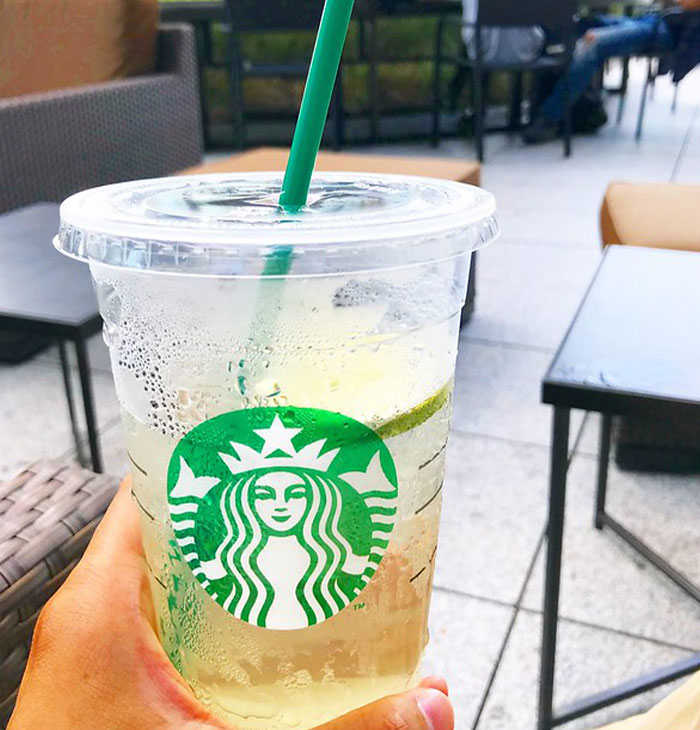 – Their percolator coffee tastes like cigarette butts with way too much caffeine in it.

– The food ok, but costs three times more than it should 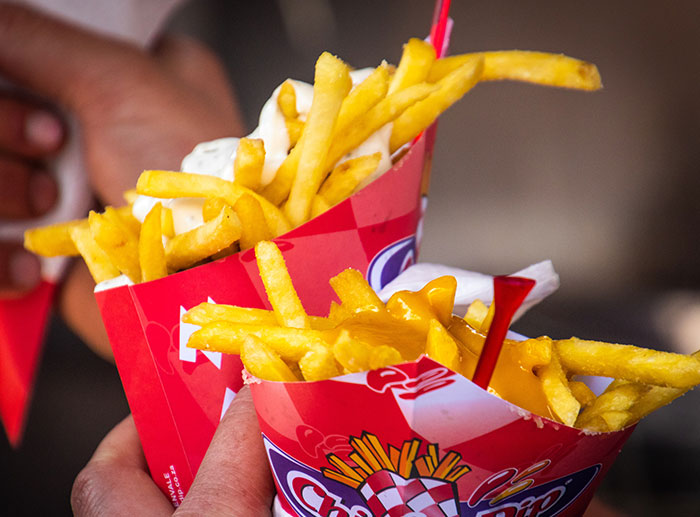 All of them. It’s gotten to the point where you can’t even get a fast food meal for under 20$ anymore. Groceries are expensive enough, I never eat out anymore 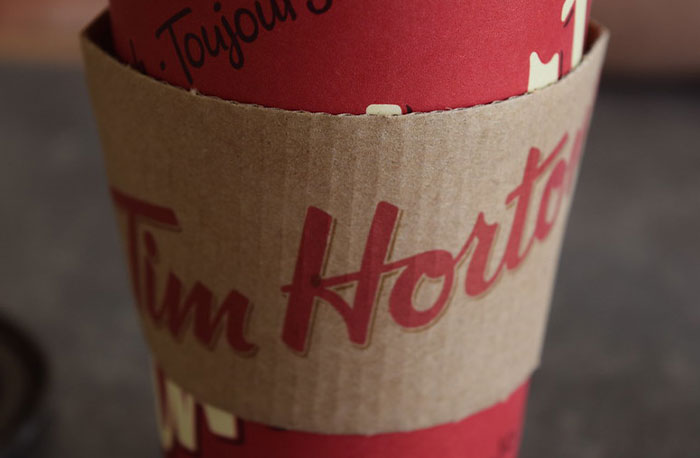 Canadian here. At the risk of being tried for treason…Tim Horton’s is way overrated. They’ve lost their identity, which once was a solid coffee and donut (fresh, from scratch, baked on site iir) shop that was never a letdown. Now it tries to be, on one hand, a hip cafe a la budget Starbucks, and is selling all sorts of fast food items it has no business selling; and on the hand it wants you to believe it’s still a coffee and donuts place. The fast food sucks, the donuts all taste the same (slathered in glaze) and are baked off site and trucked in. And the coffee? Meh. Most people I know would rather hit McDonal’s for their morning coffee. Tim’s is a national institution but needs to get it’s act together and go back to simplicity. In my opinion, of course. Sorry. 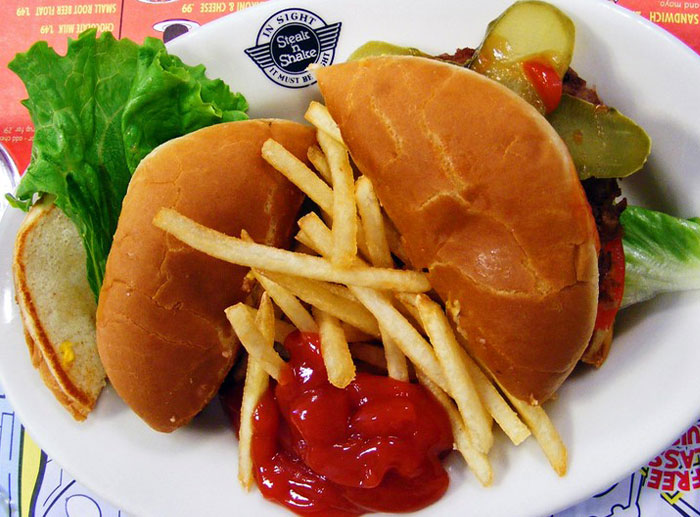 Steak ‘n’ Shake. Like so many of these places, they were legit at one point then suffered from over expansion and spiral down 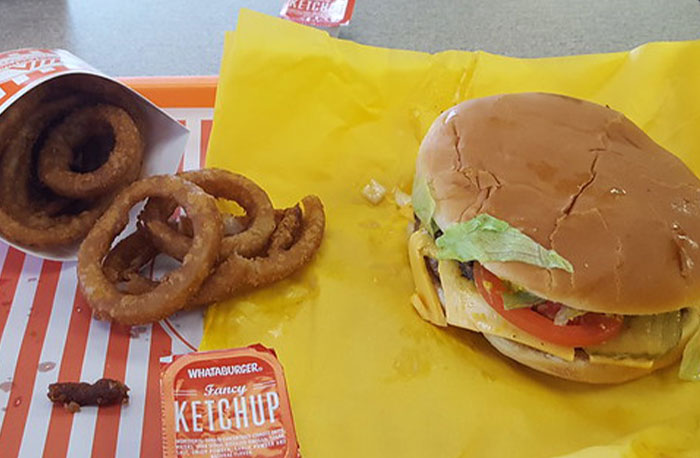 I might be banished from Texas for saying this but Whataburger is just okay.

The burgers and fries are good, but not worth the insane hype that they receive, and I find most of the breakfast options to range from mediocre to inedible.

Plus most locations are incredibly slow so it’s fast food in name only. 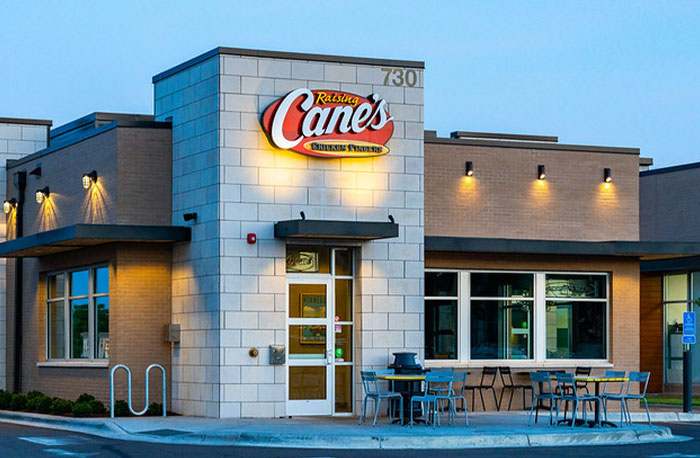 Only thing good is the sauce and bread. I live in Louisiana – people here will whine all day long about underseasoned food but will literally back up traffic to get some bland-a*s Cane’s chicken. 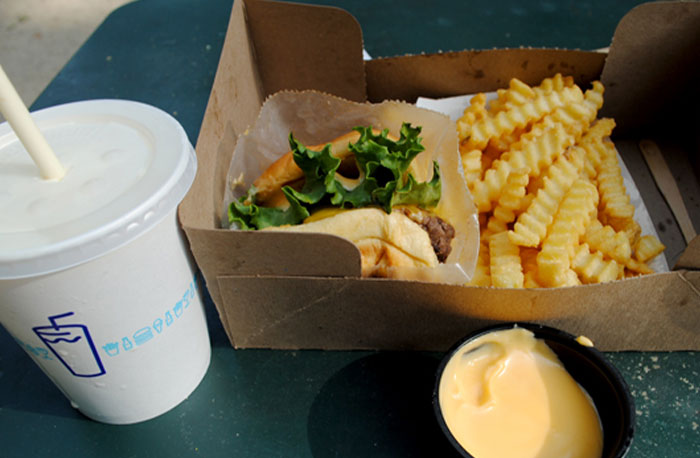 Shake Shack.
I had heard their burgers were good, so really went out of my way to have one. It was small, not cheap, and very average.
Won’t be back…there are a lot of burgers I’d eat before Shake Shack..what a scam. 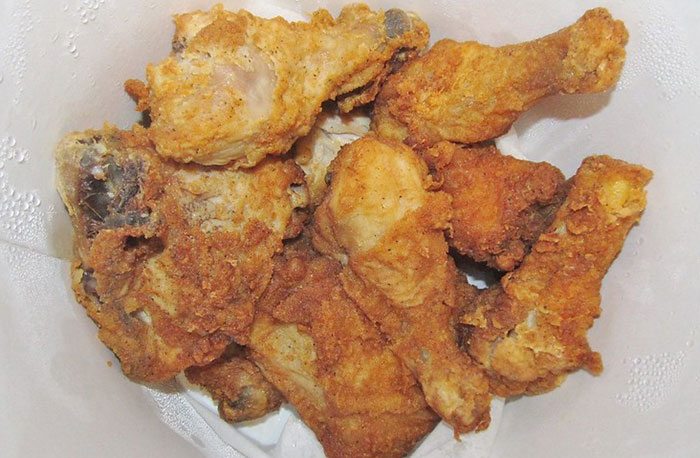 I can go to any grocery store and pick up an 8 piece bucket of fried chicken from the deli for like $6-$8. Grab a side of mac and cheese, a small coleslaw and a pack of Kings Hawaiian rolls and I spent an extra five bucks. Maybe. KFC is like $30 for an 8 piece bucket and sides and I’ll take grocery store chicken over KFC any day; it’s bigger, juicier, crispier and tastes less salty. 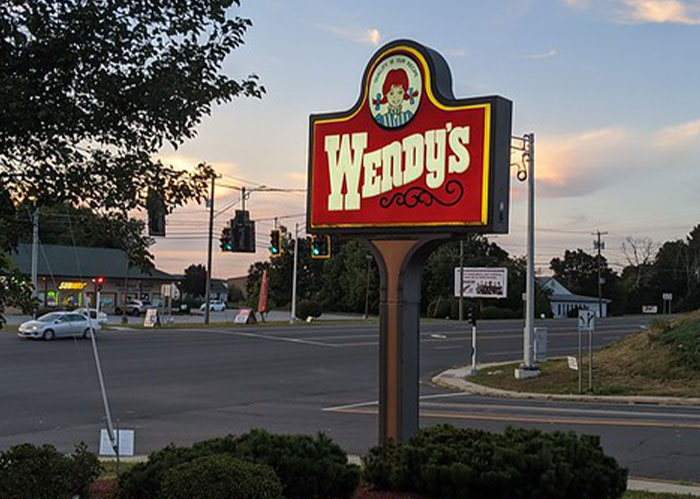 I scrolled through most of this thread.

My go to is always Wendy’s. Glad to see they’ve not been mentioned. 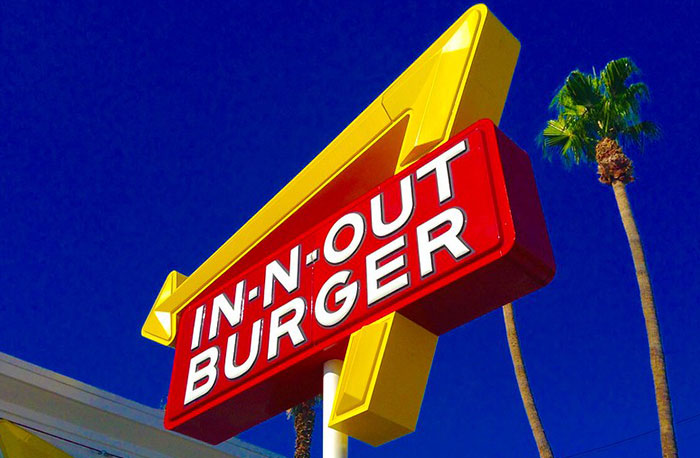 So basically this thread includes comments naming virtually every fast food place as grossly overrated, and I would agree that yes, most (if not all) fast food is gross (yet, oddly delicious at times), places like In-N-Out or Chick-Fil-A are grossly overrated in that there will never be a time it’s worth waiting in a line that wraps out into the street and around the block for an admittedly good burger and/or decent chicken sandwich. That people willingly put themselves through that kind of insane line/wait is a testament to their grossly overrated-ness.

EDIT #2; yes, going inside is generally faster than a drive through, yet there are times it’s legitimately tough to see where to even try and park to go inside when these places are absolutely slammed. This is in Los Angeles, for reference.

FINAL EDIT: I am choosing to upgrade In-N-Out to only “mildly overrated”.